… It was 6:15AM, and still dark enough to go back to bed. At this point, I realized I wasn’t cold even after standing in the dark for almost 2 hours. My dashboard thermometer showed 57 degrees, and only the slightest breeze was blowing. I’ve had some great nights out, but this one was exceptional …

Off to Elephant Butte

My wife and I decided to take the kids on a four-day weekend trip to Elephant Butte, NM. It’s a hot, dry place in the summer, but it’s pretty mild in March. There’s a reservoir with a marina and my wife’s cousin has a vacation home there, so we went down to have some fun. Since the weekend coincided with the new moon phase, I brought all of my astro gear in the hopes I’d be able to spend some time with my telescopes, but the weather ended up being too windy. Further putting a damper on things, I found that my 24mm prime lens somehow became severely de-centered since the last time I used it (and no, I didn’t drop it … weird, huh?). The only other comparable lens I have is a Canon EF 35mm F/1.4L, which I hadn’t used in forever. I made plans to shoot with it on the last night of the trip, weather-permitting.

We spent the first full day of the trip on the lake, fishing and just hanging out. The second day, we would have spent another day on the lake but the winds made the water too choppy. Instead, we did some four-wheeling in my truck near Turtleback Mountain. The dirt road there is little more than a jeep trail. Some parts were so steep I had to use 4-Low just to get up them, but we made it up unscathed! We found an open mine entrance that we (very carefully) explored. It wasn’t very deep, but had some huge quartz veins that were pretty interesting to look at. The boys got a huge kick out of it. While we were there, I noticed that the mountain was directly east of us, which would put it under the rising arc of the Milky Way this time of year. I checked SkySafari on my phone to find that the Milky Way would rise over the mountain at a little after 4AM, so I set my alarm for the wee hours of the morning before we hopped in the truck again and headed back in for the evening. That evening, and the two before it, we were treated to some awesome sunsets. Here’s one of them. 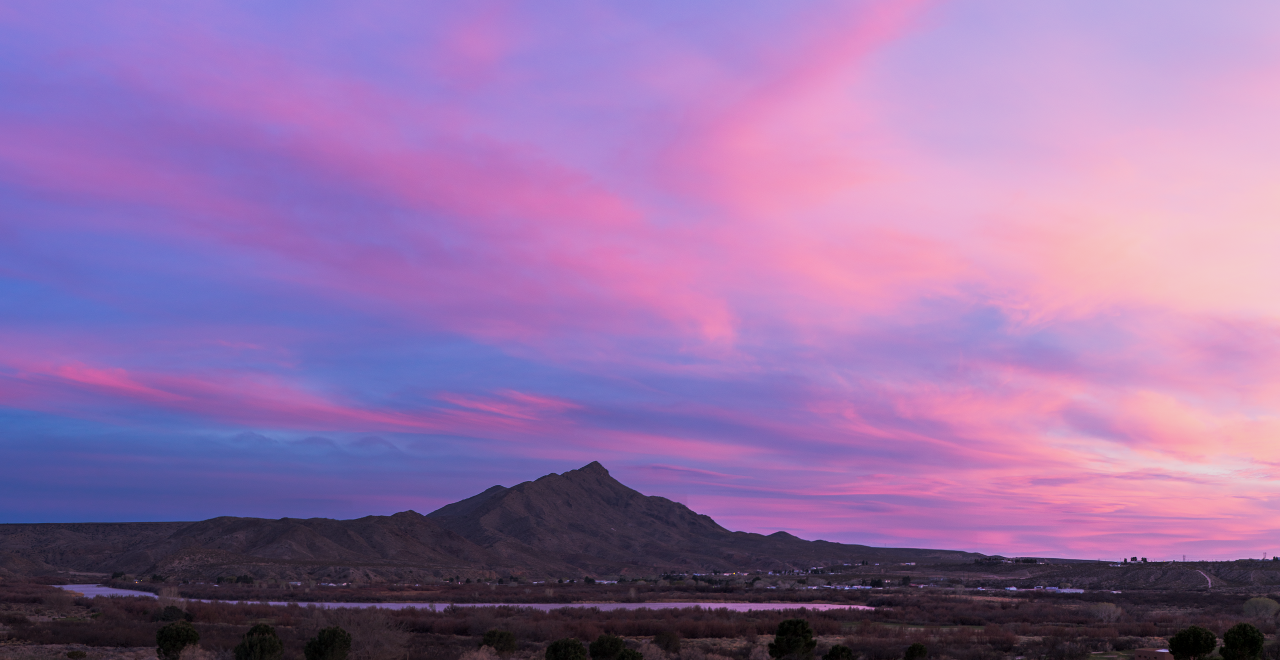 Figure 1: Sunset over Turtleback Mountain the evening before the shoot. Taken with a Canon EOS 6D and 24-70mm F/2.8L lens at 24mm and F/4, 8-vertical shots stitched together.

We were north of the mountain when I took this shot. My plan was to drive across the river (Rio Grande) to the west side of it and look eastward to catch the Milky Way rising over it.

For me, there’s always a little bit of apprehension after I make up my mind to do these kinds of shots. Being a night-owl, 4AM was going to come way too soon, no matter how early I went to bed. Beyond that, it always feels unnatural to get up when it’s pitch black outside and disappear into the dark, but after getting up and taking a quick look outside to see the first clear skies we’d seen all weekend, I convinced myself again that it was going to be worth it. Thirty-minutes later, I threw my truck into 4-Low and slowly crawled up that steep hill again, parked at the top, and cut the ignition. Camera and tripod in-hand, I opened the door to a spectacular sight.

Directly in front of me, the arc of the Milky Way was highest above the mountaintop. To my left, the glow of the city lights was just peaking over the edge of the hill I had just driven up. To my right, I could clearly see the Milky Way. This was the first time I had seen it since the end of the season last year. It brings on a feeling that’s hard to describe; a little like seeing an old friend for the first time in years. I had to sit there for a few minutes just to appreciate the moment for what it was.

Then I looked down at my phone and realized it was almost 5:00AM, and I wouldn’t have much time before the Sun would wash everything out. I quickly leveled my tripod and attached my camera, giving it a quick left-to-right pan to make sure I could still see the Milky Way through the entire rotation, and started shooting. Twelve shots later, I had captured what would become this panorama, my first ever to capture the entire arc of the Milky Way.

Figure 2: Twelve-shot panorama of the Milky Way over Turtleback Mountain, New Mexico (click image for high res, or here to view in gallery). Taken with my Canon EOS 6D and the same 35mm F/1.4L lens shown above; each exposure was 15 seconds @ F/2.8, ISO6400.

I still had some time left before the first light of sunrise appeared, so I moved up the road a little ways and took another shot, this time with a different lens. 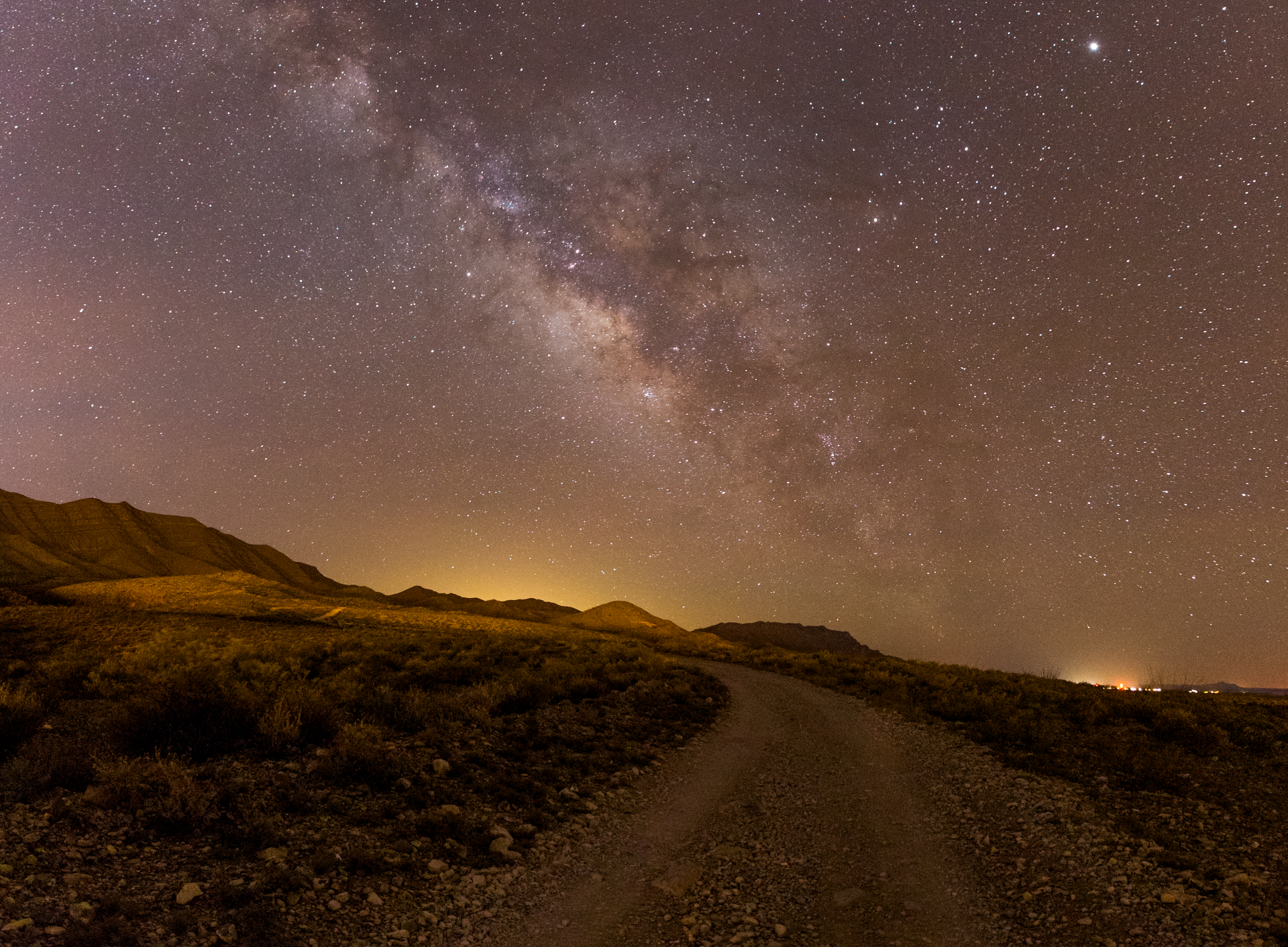 Finally, I could start to see the first bits of blue sky in my exposures and knew this session was over. I packed my camera up again and got back in the truck to make the drive back. It was 6:15AM, and still dark enough to go back to bed. At this point, I realized I wasn’t cold yet, even after standing outside in the dark for almost 2 hours. I checked my dashboard thermometer to see it was still 57 degrees outside, and only the slightest breeze was blowing. I’ve had some great nights out shooting, but this one was exceptional.

So many times I think we miss out on some of life’s most incredible experiences because we worry about how disappointed we’ll be if we try something and it doesn’t work out. With the weather as weird as it was, clouds could have rolled in or dust could have overtaken me if the wind had kicked up, and yet for some reason, none of those things happened. I think we were meant for these moments, where you are made to see your tiny place among the stars. I’m so glad to have pictures of this one!

1 thought on “Trying New Things With an Old Lens”