Have you ever driven to the middle of nowhere to watch rocks burn up in the sky? If you haven’t, you don’t know what you’re missing! In this blog post, I share some pictures from my first meteor shower ever and some thoughts on planning for the next one.

The first meteor shower I went to see happened the night of August 12-13, 2015. I had just bought my first full-frame camera and wanted to see if I could capture anything interesting with it. The annual Perseid meteor shower was expected to produce up to 100 meteors an hour and that evening, the moon was smack in the middle of its “new” phase, so any meteors would appear especially brilliant against a pitch-black sky. I decided to take Thursday, the 13th off of work and camp out of the back of my truck with my two boys and some hot cocoa.  As soon as I got off work Wednesday, we piled into the truck and made the 2-hour drive to the Jemez Wilderness.

By the time we arrived at around 8PM, meteors were already making brilliant green streaks across the sky and it still wasn’t completely dark. I backed my truck eastward into a meadow and got our sleeping bags set up in the truck bed just in time for the evening to get dark. As the boys watched, I set up my camera. Every few seconds, one of them would call out “There’s one!” There were so many meteors, we lost count. The only other noise we heard were the cows in the field and the occasional owl calling out. When I stopped hearing the phrase “There’s one!”, I knew the boys were asleep, so I started shooting. 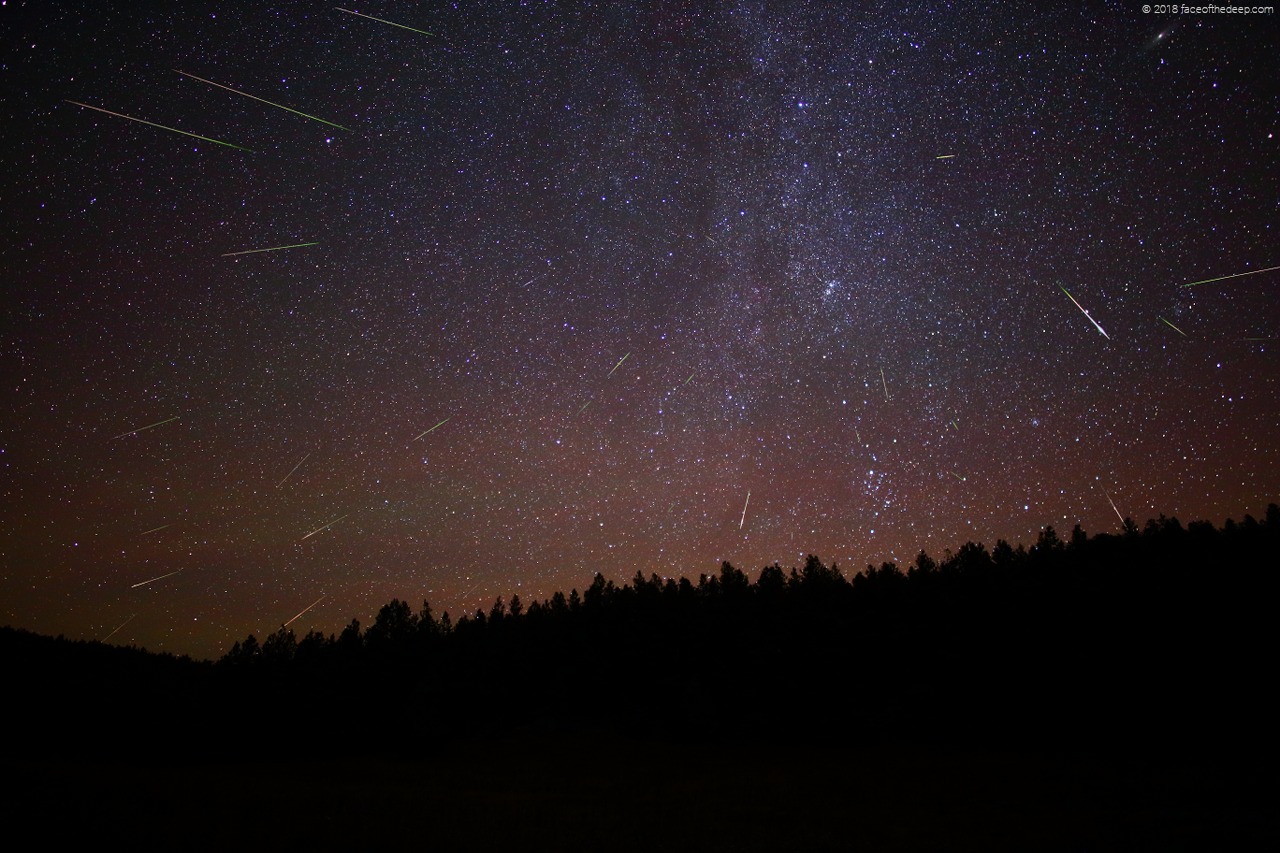 Figure 1: I captured about 30 meteors in the span of a couple of hours, seen here. Taken with a Canon EOS 6D body and a Rokinon 24mm F/1.4 lens.

A little after midnight, my camera battery died. I decided to switch over to my second camera, a Canon EOS 70D. I had an ultra-wide lens with me to try out with that body. I decided to try to shoot a time-lapse and then go to sleep until the sun came up about 4 hours later, but at this point, the meteors had gotten so bright and frequent I simply couldn’t close my eyes. I just had to keep looking. Then this happened.

I saw the meteor that exploded, and while it was incredibly bright, I didn’t realize it had left behind a dust cloud until I got home and looked at the photos. Morning came and we had some hot oatmeal for breakfast in the field before heading home. When I later looked through the frames at home and saw the cloud for the first time, I literally jumped out of my chair and laughed.  My boys loved it and still talk about it. I was hooked, and I’ve made an attempt to watch the Perseids every year since. 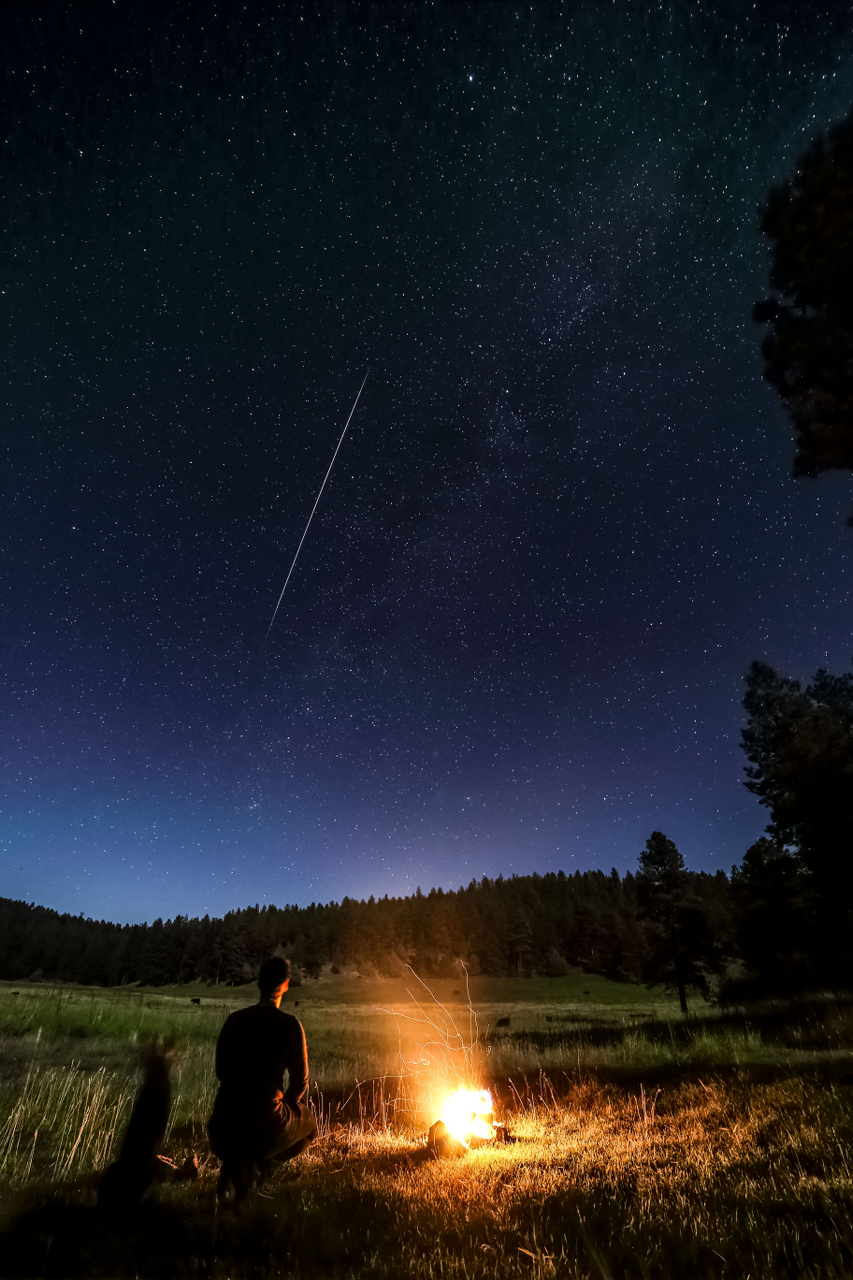 Figure 3: My dog and I by a campfire while a Perseid meteor falls overhead during the 2016 shower (click image to view in gallery). The sky appears blue because the moon had not quite set when this picture was taken. Single 20-second shot with a Canon EOS 6D and Rokinon 14mm F/2.8 lens.

The Perseid shower is actually just one of several meteor showers that sky watchers attend. It’s probably more popular than some of the others because it comes late in the summer, so the wee morning hours are relatively warm, and it’s easier for people to take time off work that time of year. Here are a list of some of the larger showers and general viewing times, taken from the American Meteorological Society’s Meteor Shower Calendar (please visit their site, it’s quite nice).

Meteor showers are predictable because they occur whenever the Earth passes through clouds of debris left behind by asteroids and comets orbiting the sun. Because we can predict the orbits of the earth as well as these debris clouds, we can get reasonably good estimates of when they will occur and how intense they may appear.

Even though meteor showers can be fairly well-predicted, they don’t always behave the way we hope they will. My family and I camped on a cold October evening to try to catch the Orionids in 2016, and it was almost a complete bust. The moon was bright that evening and we saw a grand total of *two* meteors the entire night. That said, the chance that a particular meteor shower won’t be as impressive as hoped isn’t enough to keep me from going.

This year (2018), the Perseids are peaking again during the new moon phase. I have high hopes that they will put on another great show this year. I’ll definitely be making my way out some place far from the city to see if I can capture some more meteors.  How about you? Have you ever seen a meteor shower? Are you planning any meteor shower trips this year? Let me know in the comments below!