Full of lava fields and sandstone formations, El Malpais offers some incredible scenic views and is only about an hour’s drive west of where I live in Albuquerque. Wanting to get both telescopic and wide-field shots, we left town at 3pm, early enough to set up the telescope while there was still daylight left. We had plenty of time to pick a good spot for the scope and get settled for a cold evening. The forecast was for calm weather, partly cloudy skies, and a low of 25° F. 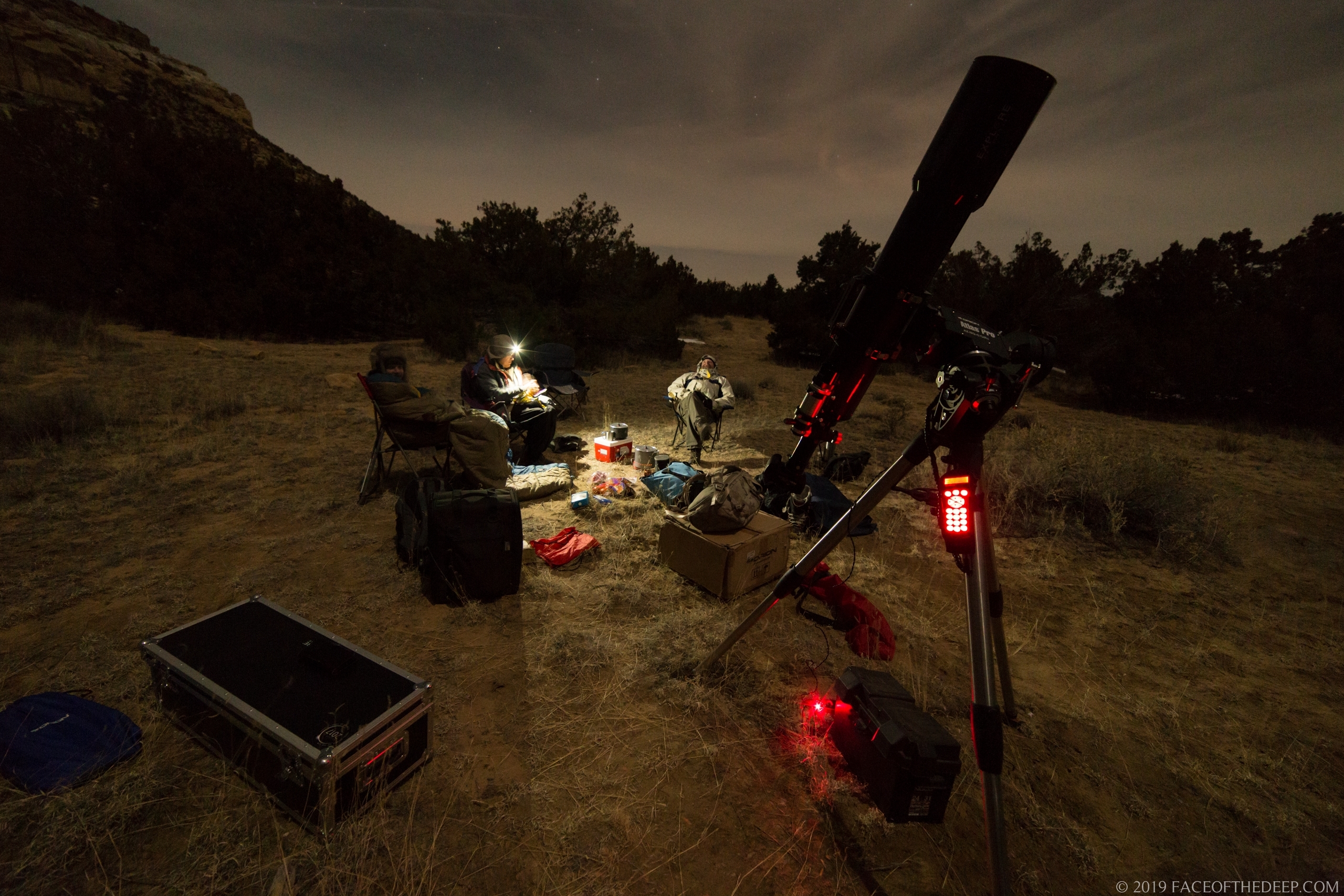 Initially, the weather looked like it wasn’t going to cooperate. The skies were overcast upon our arrival and stayed that way through most of the leading partial phases of the eclipse, but every cloud has a silver lining.  We got to see paraselenae, more colloquially known as “moon dogs”. 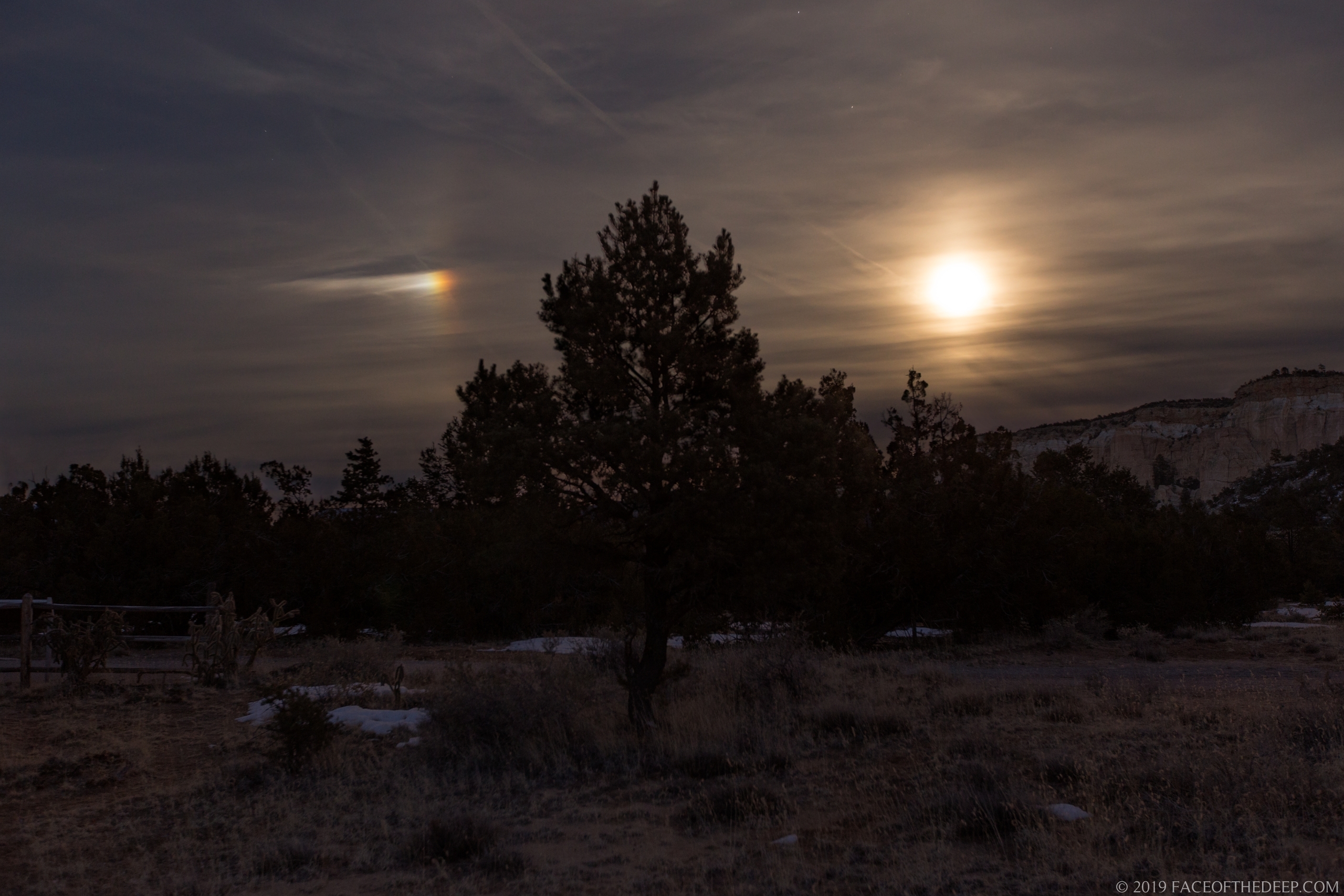 Figure 3: A Paraselene, or “Moon Dog” strongly reflects moonlight 22° left of the full moon, minutes before the eclipse began. It’s likely that a second moon dog was visible on the right side of the moon, but our view was blocked by a cliff, just out of frame.

I had read about moon dogs before, but had never seen them myself. According to Wikipedia, this is a relatively rare phenomenon and usually too dim for any colors to be seen by the naked eye, but we could see the colors easily. What causes the bright spots and colors to appear are hexagonal ice crystals in the upper atmosphere. Getting to see it for the first time was almost as exciting for me as the eclipse itself, and my disappointment over the weather was immediately tempered.

As we waited for totality, the clouds got thicker until just a few minutes beforehand, then dissipated as the last sliver of the leading partial phase disappeared. Below is a shot I captured a couple of minutes before totality. 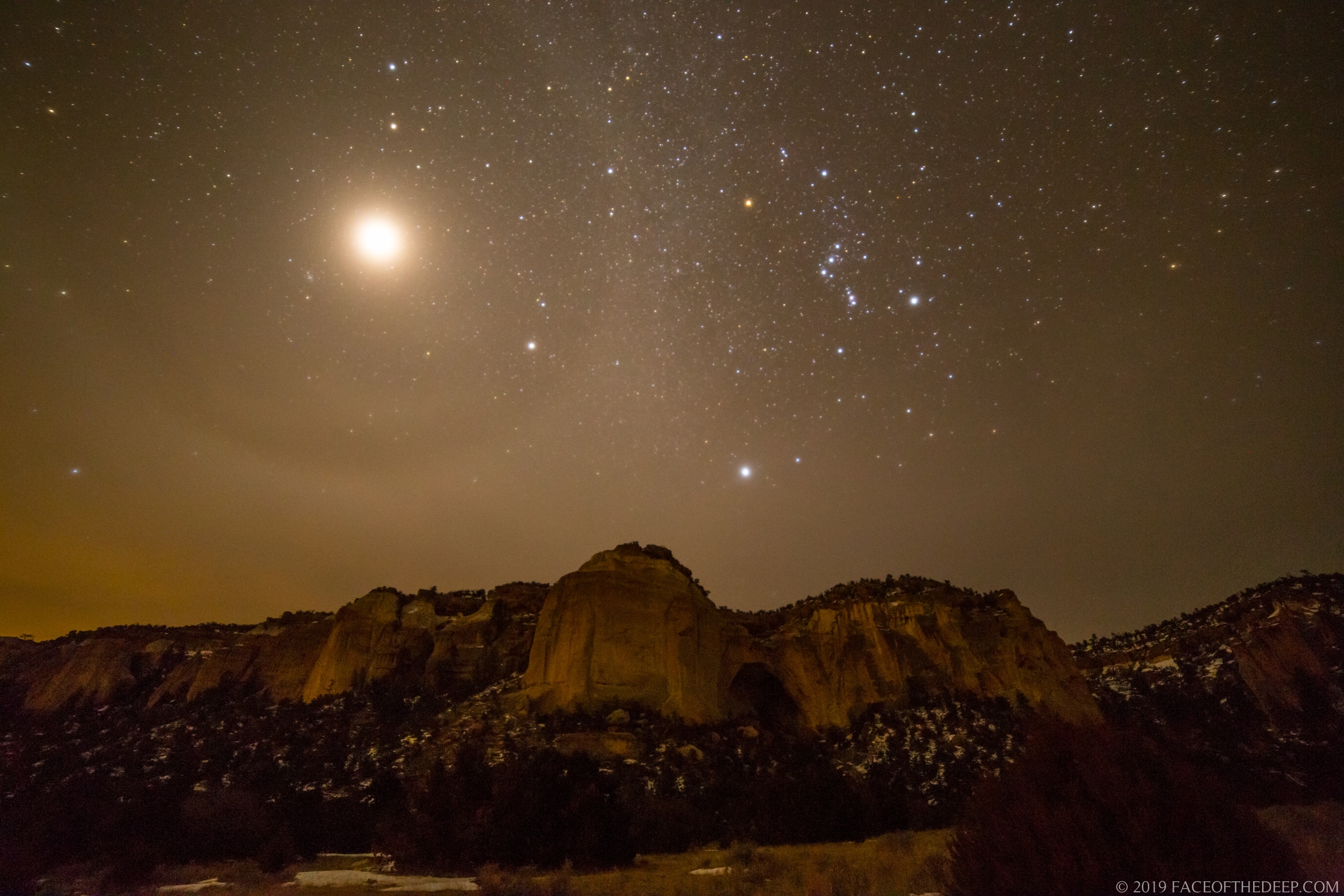 Figure 4: The moon, just before totality. The halo around it disappeared a few minutes later when the last sliver of the partial phase disappeared. La Ventana Natural Arch is directly below Sirius, the brightest star in the sky. Prints available.

As the moon slipped into totality, it reminded me of my experience at the total solar eclipse in 2017. Although not as dramatic as a solar eclipse, there is a gradual falloff of overall brightness as the moon creeps through the partial phases, then a big drop-off as it enters totality. The whole sky took on a reddish hue, enhanced by the thin haze in the sky, then everything became very dark. Once the moon reached totality, I set the scope to automatically shoot 5-second exposures every minute for the next hour, then we all set out for the arch, a little over a quarter mile away.

The arch is about 100 feet tall and 150 feet wide, leaving a relatively narrow window of sky open overhead and to the southeast. I wasn’t sure if we’d see the moon come up through it at first, but sure enough, it did. We spent about 20 minutes doing some light painting and here’s what came of it. 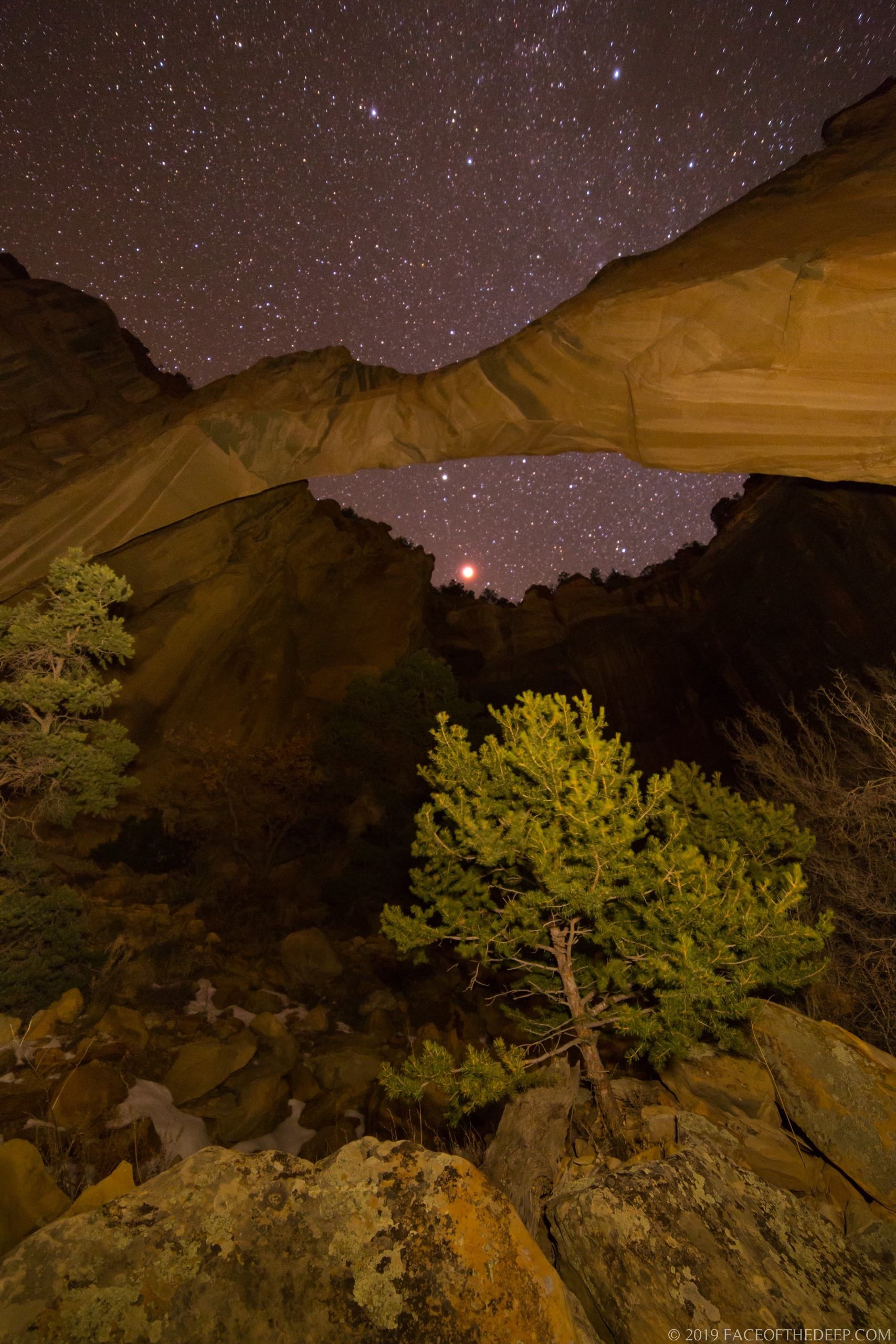 Figure 5: The bright red orb in the center of the image is the moon. We used a combination of headlamps and cell phone lights to light up the scene. It took a few tries. The haze in the sky was still present but much less visible with so little moonlight left. Prints available.

A few minutes before totality was supposed to end, we made our way back to our camp chairs to make some hot food and see what the telescope captured. Below is a slideshow of the three most striking views captured during totality.

As we ate, we had time to watch (and shoot) the trailing partial phases of the eclipse before packing up at around 12:30am. The moon again returned to full brightness and we packed up without headlamps. In just a few hours, we had experienced changes in brightness that normally take the moon four weeks to progress through as it orbits the earth. In some ways, it almost felt like we were living in a time lapse video taken on another planet; it was wild. 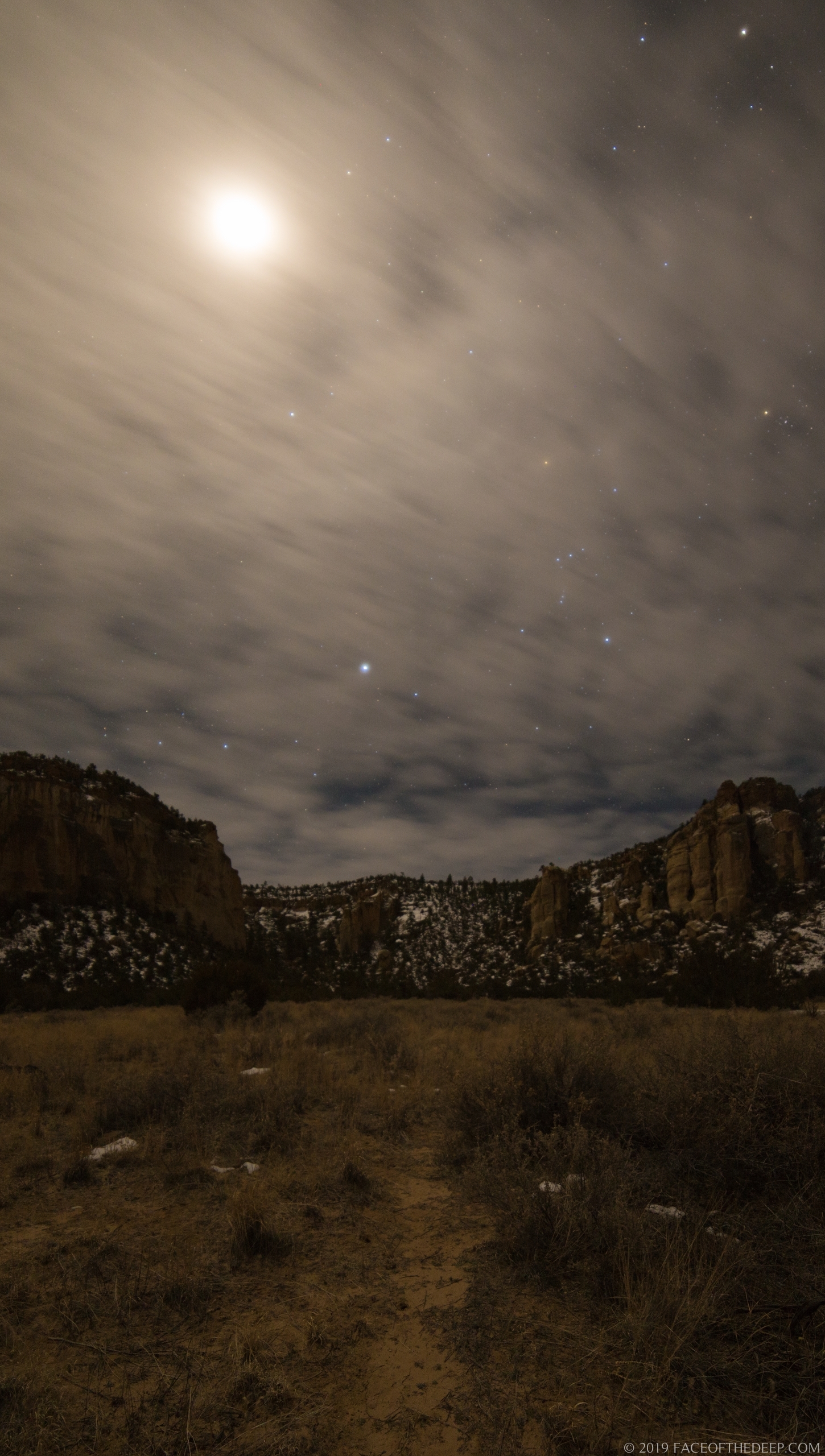 Figure 7: The moon, just after the last parts of the trailing partial phases ended. The night sky was bright again, appearing almost like daylight.

After packing everything out and returning our site to the way it was before we arrived, we drove home and got to bed at around 2:30am. Fortunately, the following day was Martin Luther King Day, so I didn’t get to get up early for work, which left plenty of time to process these pictures!

The Full Path of the Eclipse

One thing I’ve always wanted to do is create a composite of a total lunar eclipse that illustrates just how big the Earth’s shadow is. Here’s what I came up with, with an explanation below.

Figure 8: The full path of the moon through the earth’s shadow (click here for full-size version). Prints available.

The moon is traveling around the earth in a circular orbit. Sometimes, the moon’s orbit crosses the shadow of the earth. This is what we call a lunar eclipse. A total lunar eclipse occurs only when the moon’s entire face is covered by the shadow of the earth. Using shots of the moon that my telescope captured before, during, and after the total eclipse, I’ve reconstructed the path of the moon’s orbit as it traveled through the Earth’s shadow, or Umbra. The eclipse started in the lower right portion of this image and ended about 3 hours later in the upper left; this is due to the moon’s apparently counter-clockwise orbit around the earth when observed from the northern hemisphere.

Now, if you’re incredibly observant (or just nerdy like me), you may have noticed something peculiar about the shadow. The moon is 2100 miles across, and the shadow here might be able to contain three moons, edge to edge, so it’s roughly 6000 miles across. But the earth is about 8000 miles in diameter, so why is the shadow so much smaller? This illustration from Wikipedia explains. 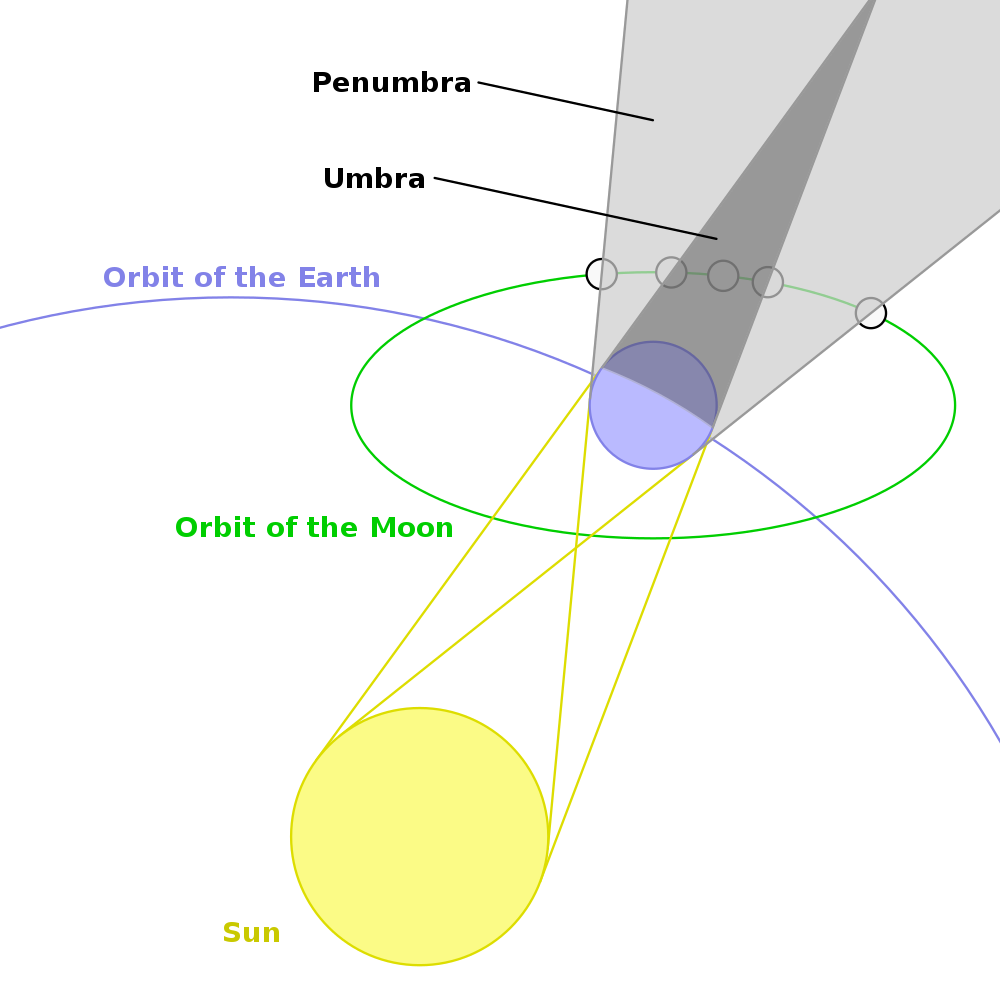 The sun is far larger than the earth, which means that the shadow cast by the earth is actually a cone, projected away from the sun. The moon’s orbit causes it to pass through a portion of this cone, which makes the shadow appear smaller than the earth’s diameter.

It’s always a treat to watch lunar eclipses. It’s an excuse to stay out late with friends and explore, and I’m glad to have shared it with a few friends this time around. This year’s total lunar eclipse is the last one we’ll be seeing for awhile (the next one is in 2021), but that leaves a lot of time to plan for guests on the next excursion. Maybe I’ll see you there 🙂