A Clear Night at Gladys Lake

If you’ve read my previous post, our first night backpacking in the Olympics was pretty cloudy. As things cleared up on the second day, we moved our tent to a much better camp site. After a day of playing hard, I set my alarm for 11PM and crashed out for a few hours after dinner. When I woke up, the sky was perfectly clear. I quietly got out of the tent so as not to wake my wife up, looked up, and this is what I saw. 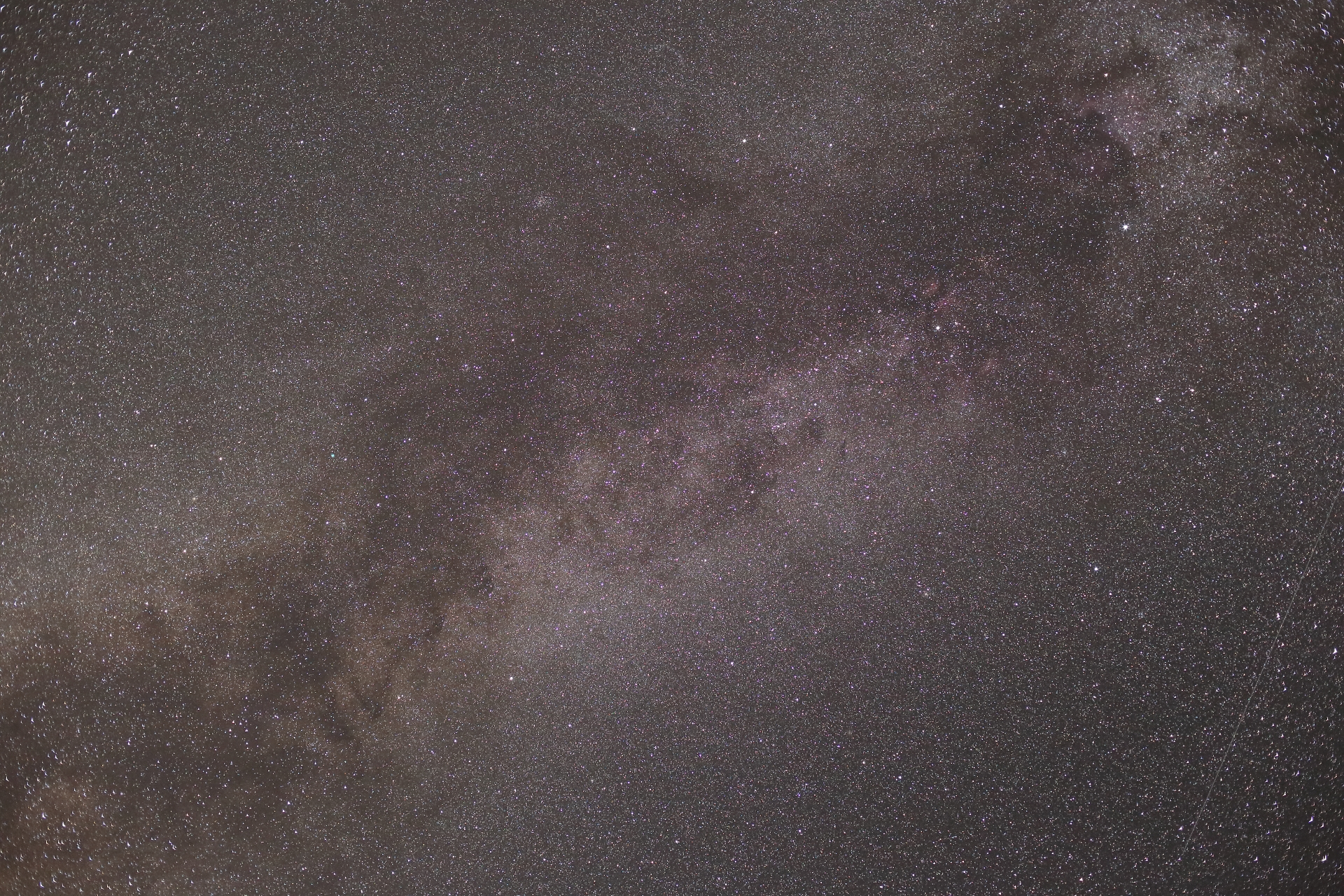 Figure 1: A perfectly clear summer night in Olympic National Park. This section of the milky way is about halfway between the core and outer region, as seen from the northern hemisphere. Image shown is straight out of camera, with no processing. Shot with a Canon EF 50mm F/1.4 lens at F/2.8.

There wasn’t even the slightest perceptible breeze. The only sound I heard were crickets and the dull rumble of the rivers feeding snowmelt into the valley. It wasn’t cold, but not warm either; if I had to guess, the temperature was probably between high forties and low fifties, Fahrenheit. It was very dark. Knowing that there were bears and mountain lion in this area made me a little nervous, but the couple of deer within a few dozen yards of me were oddly comforting (I think they probably taste better to predators than humans do!). I set up my camera and tripod to shoot a tilted Milky way through the trees right next to our tent. 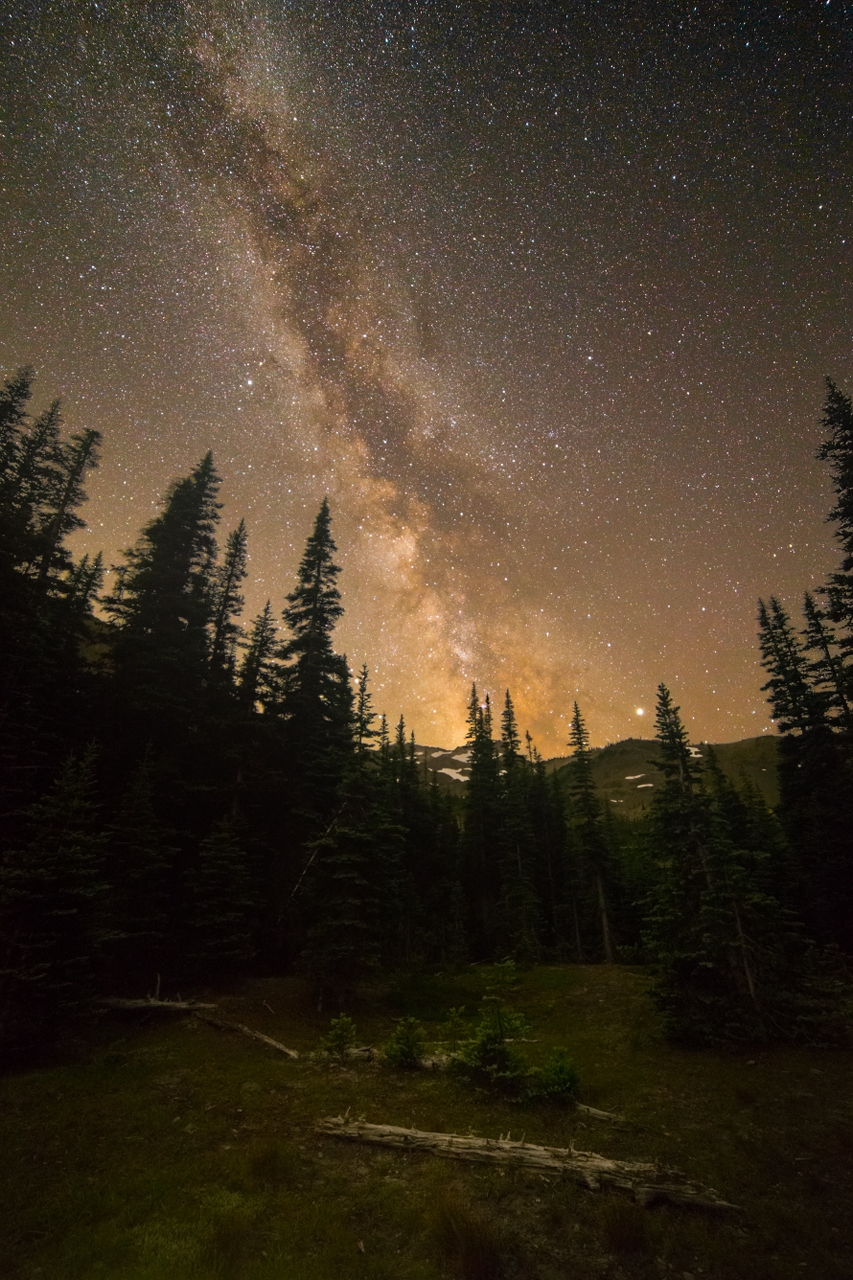 Figure 2: The Milky Way over Grand Valley, Olympic National Park. The brightest “star”, below the tree tops, is Jupiter. Shot with a Canon EOS 6D and a Rokinon 14mm F/2.8 lens. Prints available.

This shot took about 30 minutes to make. By the end of it, my lens had started to fog up! Not sure what else to do, I shoved it into my pocket and walked around to warm it back up, which seemed to do the trick. At this point, it was nearing midnight and my wife woke up. She saw I was out shooting and joined me for some stargazing for a bit. At this point, we decided to walk about 300 yards through the forest to the lake. I’m not sure I would have done it by myself, so I was more than happy to have the company. As we approached Gladys Lake, the most spectacular sight awaited us. 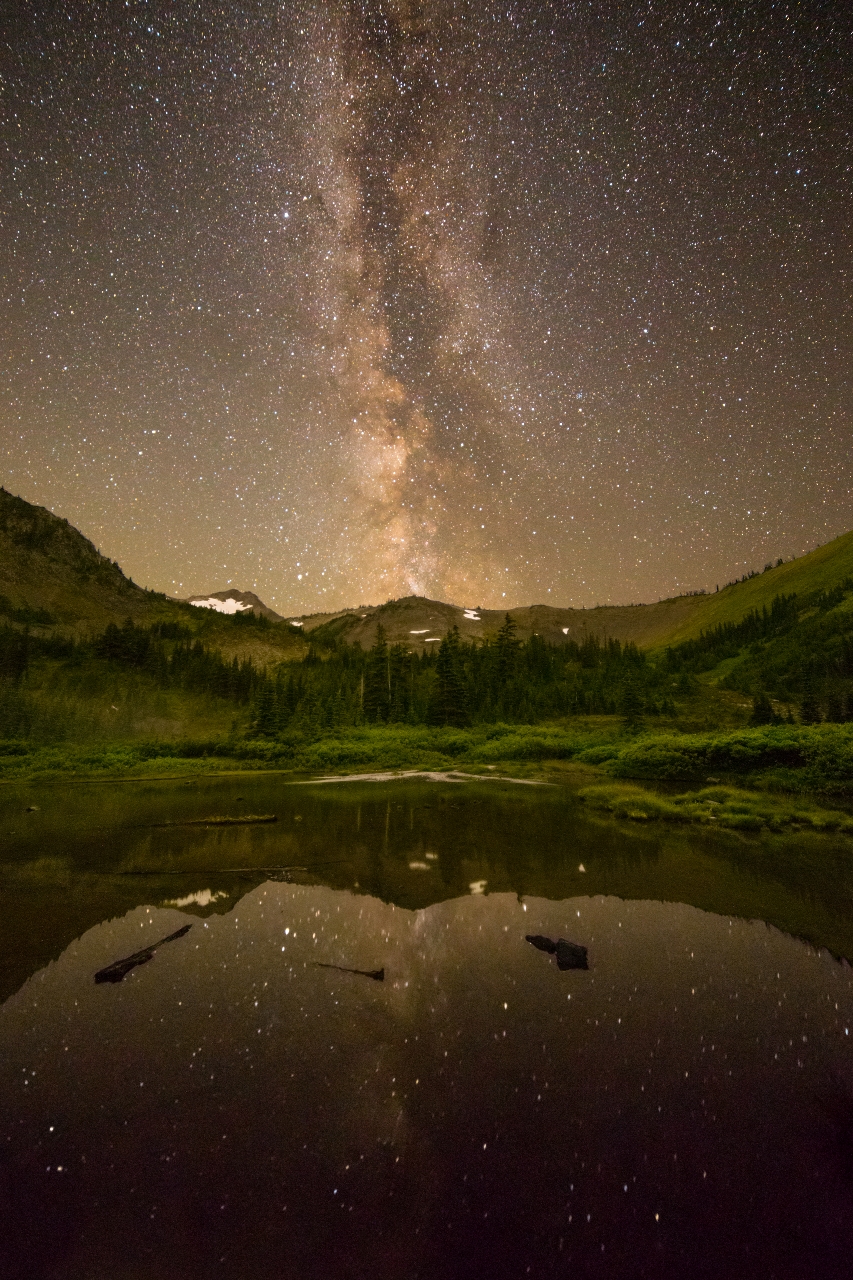 The air was so still that the water took on a mirror-like appearance. The stars in the water seemed almost as bright as the stars in the sky, so as we walked closer to the lake, it felt like we had left earth and were just floating in space, with stars in all directions. It was extremely hard for me to ignore the urge to keep on walking, but I knew if I did that I’d end up floating somewhere else!

It took another 30 minutes or so to capture this image, but they went by like seconds. I could have spent hours there. It’s difficult to find the words to describe how it felt; an experience I’ll probably continue chasing for the rest of my life. After wrapping up the shoot, we went back to bed, completely content and very tired.

Moving on to Moose Lake

The following morning, we took things slow and packed up our camp. Our itinerary had us spending two more nights about a mile down the valley at Moose Lake. We made our way back down the valley and met up with my parents, who had gone to Moose Lake the evening prior.

Figure 4: A few shots on our way back down to Moose Lake from Gladys Lake.

We spent the day playing in the sun at the lake and making a day hike up the valley to the top of Grand Pass. After we got back, we broke out some snacks, which a chipmunk promptly started begging my dad for!

During this day, we decided to cut our backpacking trip a little early to give us two nights at Seaquest State Park, which is the closest state park to Mount Saint Helens. My wife had never been there before, and to get the most bang for the effort, we thought it’d be best to take our time there, even if it meant backpacking one day fewer than planned. This also meant only one more night in the Olympics, which was a little bittersweet.

We were in luck. Not only were we camped right on the edge of the lake, but the weather stayed calm yet again. I set my alarm again for 11PM and when I got up, I was as blown away by what I saw as I was the night before! 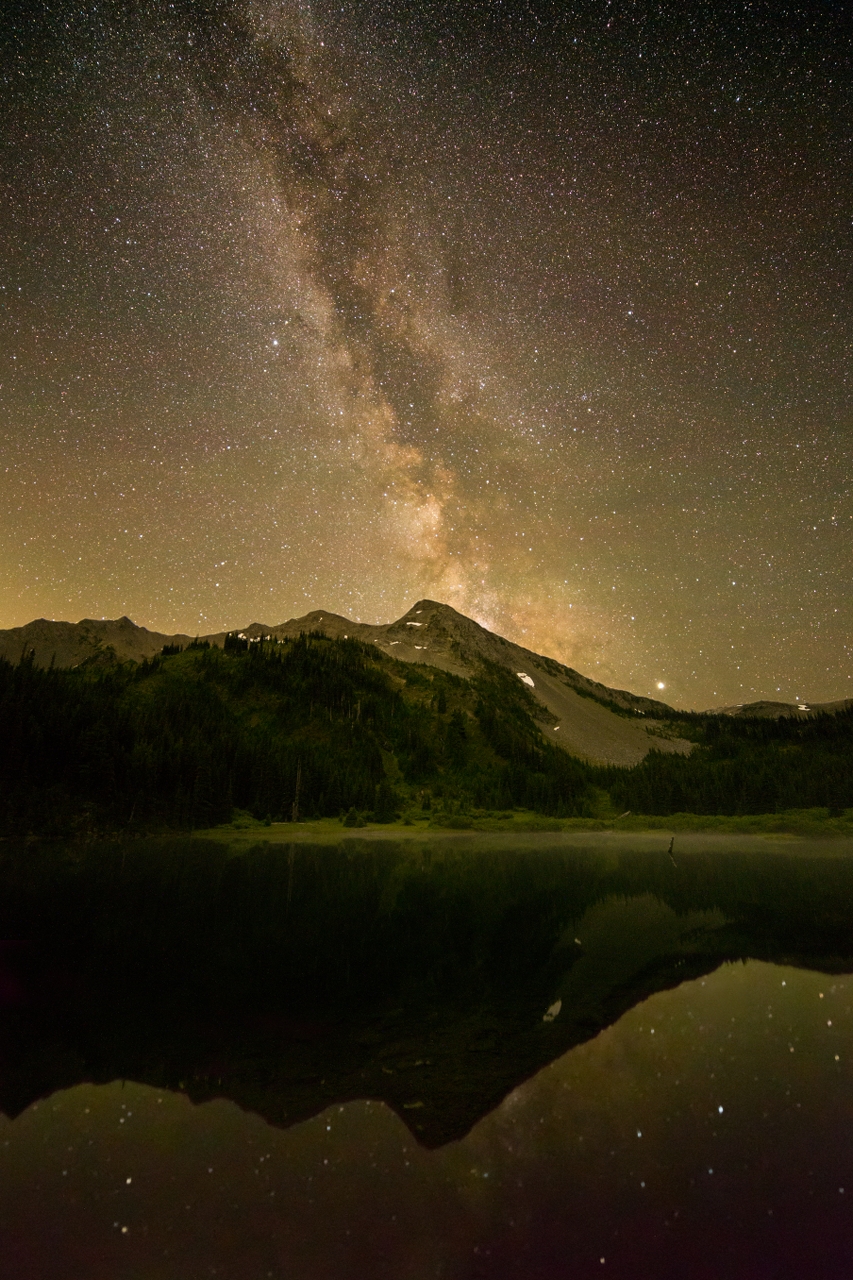 This time, the air was even more clear. Notice the red and green banding in the image. That’s not something wrong with the sensor, that’s alternating red and green bands of air glow. I even saw a few meteors while I was shooting this (although I didn’t manage to capture any). I stayed up until about 1AM shooting and watching, and again, went to bed very tired, but very content.

The next morning was cold. At some point in the wee morning hours, a light mist rolled in over the lake and soaked everything. It wasn’t dangerously cold, but made us uncomfortable enough that it was a lot easier to say goodbye than it would have been otherwise. We’d be spending two nights near Mount Saint Helens after hiking out. If the weather continued to hold out, we’d be in for a real treat. Find out what happened in Part IV (coming soon)!